When we set about to write the 2013 review and compile the data – as any good writer – we reviewed our 2012 post. And we realized we were probably going to finish our 2013 piece with the same wish: “to bring our subscribers a more visual and immediate way to better understand the trends that are occurring in OpenComps’ dataset.” And we didn’t want to make the same promise twice. So we stopped writing reviews and started writing code!

Today – together with our 2013 review – we are proud to announce the new Trends & Charts section (see here for hotel, office, retail or multifamily). Currently, you can find it in our Browse By section (dropdown) together with the other data aggregation screens. And we are making it open for every one, reserving for our PRO Subscribers the advanced features such as filtering, longer time period (20 years) and advanced chart tools such as data zoom and save to PNG. This charting tool combined with its extensive search filter can produce really outstanding data insights. We hope you will consider unlocking it’s full potential with a PRO subscription.

And now onto our 2013 review. The chart that follows gives you a quick overview. 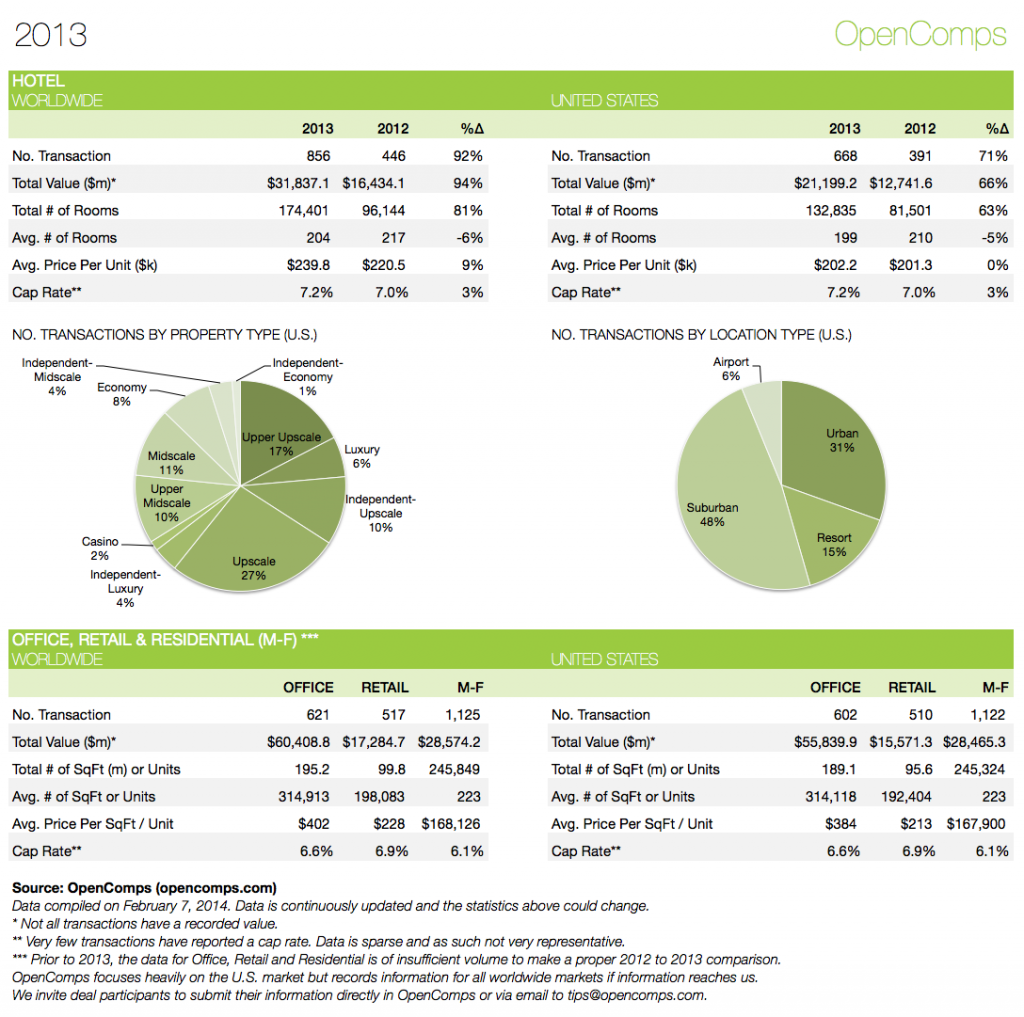 Transactions that took place in the United States totaled 668, with 132,835 rooms, a gross volume of $21.2 billion, average room count per transaction of 199 rooms, an average price per room of $202,200 and average cap rate of 7.2%. These were also significantly higher than 2012 volume with a 66% increase in aggregate volume.

In the following three sections, as we promised in the beginning of the year, we have re-doubled our efforts and attention. We really want your participation but we believe we are supplying good amount of “electricity” in the system to more than satisfy your read of the market pulse. While we are pretty confident that in the hotel sector we are close to 100% coverage in the United States – for institutional real estate deals – in the office, retail and multifamily, we are probably at a solid 80-90%. If the deal really mattered, we took note of it.

Here are three charts showing the ten-year trend in Total Transactions, Total Amount (volume) and Average Amount Per Square Foot, straight from our new office Trends & Chart section (keep in mind the above commentary for reduced industry coverage from 2008-2012).

Here are three charts showing the ten-year trend in Total Transactions, Total Amount (volume) and Average Amount Per Square Foot, straight from our new retail Trends & Chart section (keep in mind the above commentary for reduced industry coverage from 2008-2012).

We had a really strong year covering multifamily transactions. But we know the activity was even greater as there were a number of portfolios that traded hands and quite often under the radar. We really need your participation here as this is an exciting sector where we really would love to get to 100% coverage, especially in the U.S.

Here are three charts showing the ten-year trend in Total Transactions, Total Amount (volume) and Average Amount Per Unit, straight from our new multifamily Trends & Chart section (keep in mind the above commentary for reduced industry coverage from 2008-2012).

We hope you enjoyed our 2013 review and our new Trends & Chart tool. This tool significantly increases the transparency of the data housed inside OpenComps. However, for OpenComps to truly capture the transaction activity in the United States and globally, we really need YOU! Remember, the dataset is open to and free for community participation. Our aim is not to be the next research company but rather to be the technological platform that enables increased transparency and better communication for the global institutional commercial real estate industry. We hope you join us in 2014! We wish you much success throughout the year!