From 0 to 176 in less than 16 months… ARC Hospitality is eating up hotels faster than anyone right now. With no less than 6 portfolio transactions since early 2014, ARC Hospitality has amassed over $2.75 billion worth of hotels. See the map below or for the full list, click here. 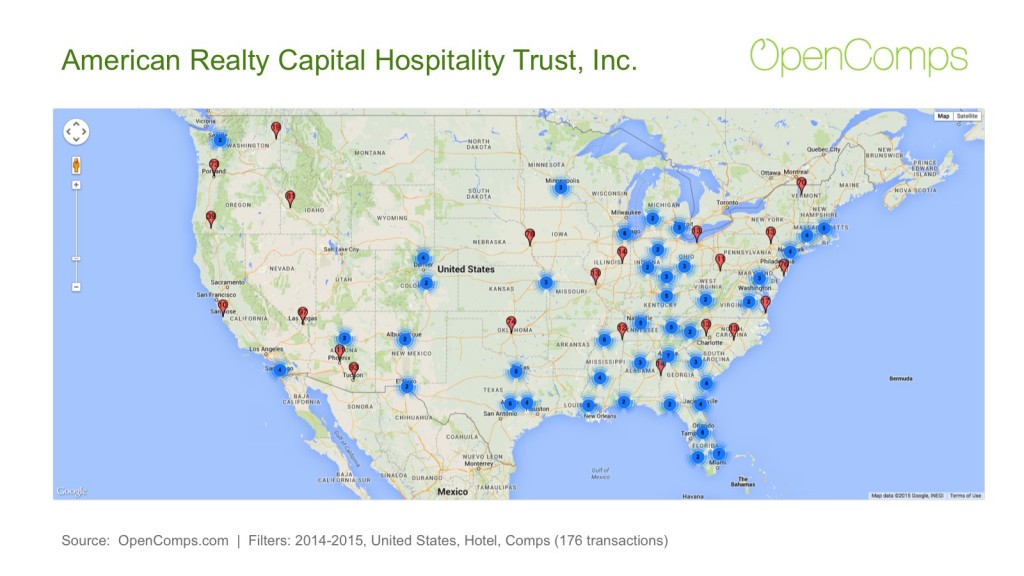 As you know, we keep tabs on many public companies through news reports and, more importantly, their SEC filings. Some companies take the word “public” seriously and we really appreciate it. And some companies – while having no problems raising money publicly – have very distorted understanding of what it means to be public. Example #1: Equity Residential (NYSE: EQR).

END_OF_DOCUMENT_TOKEN_TO_BE_REPLACED

Strategic Hotels and Resorts in partnership with KSL Capital Partners acquired the Essex House towards the end of 2012. The hotel was reflagged to JW Marriott brand after Marriott International signed a 50-year management deal, in which it provided NOI guarantee to the new owners. Year 2013 is the first full year following the closing of the transaction and, here at OpenComps, we were curious to uncover how the owners and manager fared a year later.

END_OF_DOCUMENT_TOKEN_TO_BE_REPLACED

While we were busy with our new re-design over the summer, the transactions market didn’t let up either during the  “quiet” months of summer which are supposed to be filled with family vacations and BBQs. With the third quarter of 2013, here is an update on our quarterly and year-to-date statistics.

The Q3 one-word summary is: HOT. As in summer hot, but really as a hot transactions market that we are seeing at the moment. Can it get even hotter? We think so. We think we are in a cyclical upturn which hopefully has more legs to run.

END_OF_DOCUMENT_TOKEN_TO_BE_REPLACED

Apple – no, not this Apple – (REIT Six) is raking in cash. And so is it’s top executive.

As announced recently, Blackstone struck a deal to acquire Glade Knight’s Apple REIT Six for $1.15 billion or approximately $150,000 per room. Apple REIT Six is comprised of 66 upscale, extended-stay and select-service hotels or 7,658 rooms of mostly Hilton (Hilton Garden Inn, Hampton Inn and Homewood Suites) and Marriott (Residence Inn, Fairfield Inn and TownPlace Suites) branded properties. We have them all in OpenComps: see the portfolio breakdown! So, after Apple REIT successfully exited its Apple Hospitality Two (sold to ING Clarion in May 2007 for $890 million) and Apple Hospitality Five (sold to Inland American Real Estate Trust in October 2007 for $677 million), Mr. Knight pulls out of The Great Recession unscathed… and actually with quite a few nickels in the pockets of his shareholders and, most importantly, himself.